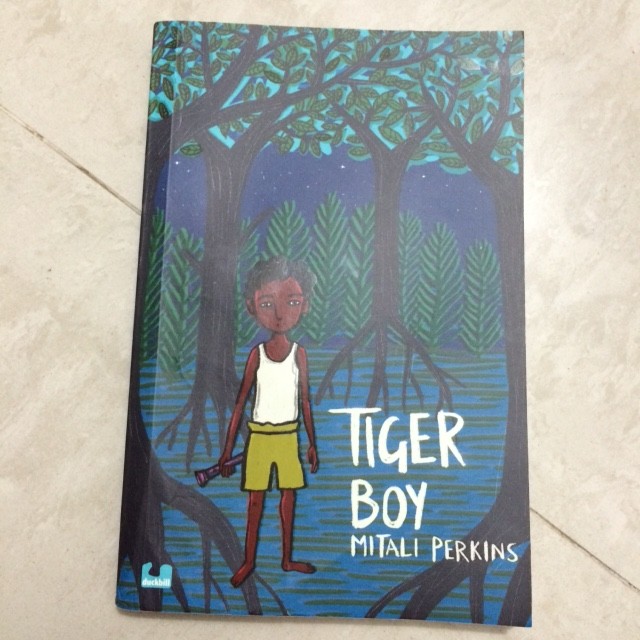 It's only once a while that you get a book that manages to create a lump in your throat and at the same time makes you read as fast as you can because you want to know what happens next? The Tiger Boy by Mitali Perkins, published by Duckbill Books, is one such book.

Neel is a class 5 student who lives in the Sundarbans. He loves his life with his elder sister Rupa, his parents and his best friend Ajay. Neel is brilliant in his studies and he has been selected by the Headmaster of the school to attend a scholarship exam to represent his village. If he gets through the exam, he gets to go to Kolkata to study. While his parents don't have the money to hire a tutor, Neel is doing his best to study on his own. In his heart, he doesn't really want to leave the Sundarbans. The only subject which baffles him is Mathematics. Meantime, he gets to hear about a tiger cub which has been separated from its mother and sibling. Mr. Gupta, who has come into the village and has been involved in illegal activities, has promised a reward for whoever gives him the tiger cub. Neel knows that Gupta will not let the cub live. Neel wants to find and save the cub.

What does Neel do? How does he use his Mathematical knowhow to find out about the tiger cub? What does Rupa, his sister do to help him out? Why is his father in such a sad mood? Can Neel actually win the scholarship? Do they find the tiger cub? What happens when his father sees him breaking rules? Why is the Headmaster so bent upon him
getting the tutor? Who is the only other student from the village who went for the scholarship but came back to the village? Why does everyone hope Neel gets the scholarship?

The book is written in a wonderful manner and each character has been etched so well. I could almost feel the tension in Neel's mind worrying about the tiger cub. The book is a treasure-house of knowledge as far as Sunderbans are concerned. The author manages to draw a very realistic picture of the marshlands and also in a very subtle way hints about how we are destroying the natural habitat of tigers. The book touches upon the aspects of poaching and cutting of the trees as well along with talking about the devastating effects a cyclone can have on the marshlands.

The story moves all the time and I bite my nails in tension wondering if Neel and his sister would find the tiger cub at all? More importantly, will they be able to save it from Gupta and his goons?

Mitali Perkins the author of the book, The Tiger Boy was kind enough to answer our questions on her inspiration behind the book and her ideas on inculcating the importance of environment to children from an early age. Thank you, Mitali, for speaking with us.

Toka Box: A book on Sunderbans, especially for kids, is something I have never come across earlier. How did you think of the story about tigers and a little boy?


Mitali: I was visiting Kolkata and heard about the "climate refugees" of the Sunderbans and the danger of child trafficking from that region. After reading more about this endangered and unique ecosystem, I was captivated. And then we visited, and it was even more intriguing of a setting for the story. Roots poke up through mud to reach for oxygen. Crocodiles and crabs cling to shores as seven-meter tidal waves bring the sea rushing into deltas and tributaries. This archipelago of islands is the only place on the planet where tigers drink salt water and attack and eat humans. These beautiful creatures need space for habitat and plentiful prey to survive, and both are running short in the Sundarbans. Meanwhile, the poverty of the people who live close to the tigers is intensifying. Hungry tigers, hungry people, and all of this complexity existing only a few hours' drive from Kolkata, the teeming city of my birth. What better place to set a story about a tiger and boy?

Toka Box: A lot of people are unaware of what the Sunderbans holds in terms of flora, fauna and sheer beauty of the marshlands. How did you come up with such a realistic picture of the place in your book?


Mitali: I read widely and watched a lot of youtube videos, but nothing could match the five-senses experience of taking a river journey through the deltas and tributaries of the Sunderbans. It is a magical place.

Toka Box: Why does Neel fear mathematics? I could so connect to him :)

Mitali: Everybody's brain works differently -- some of us are better with words and others with numbers. Neel feared maths because he didn't have an aptitude for it, but this fear can be overcome once we see a pressing need to acquire a skill we lack. He also needed a good teacher whom he trusted.

Mitali: Stories are a good place to start, but traveling, if possible, is a great way to understand how we are interconnected with the environment. The Sundarbans, for example, reveal how the connection between plants, animals, and people are vital to the survival of all three. If your children sense that you truly care, they, too, will begin to value this connection. Small decisions in the home matter, also, like recycling as a family and living with less waste.

Toka Box: Which writers have influenced your writing?

Mitali: I am an anglophile, so I grew up reading C.S. Lewis' NARNIA series, went on to devour THE LORD OF THE RINGS by J.R.R. Tolkien, and of course now am a big fan of J.K. Rowling and HARRY POTTER. I don't write fantasy (not yet, anyway), but all three of these writers present a masterful weave of people, place, and plot, which is what I strive to emulate.