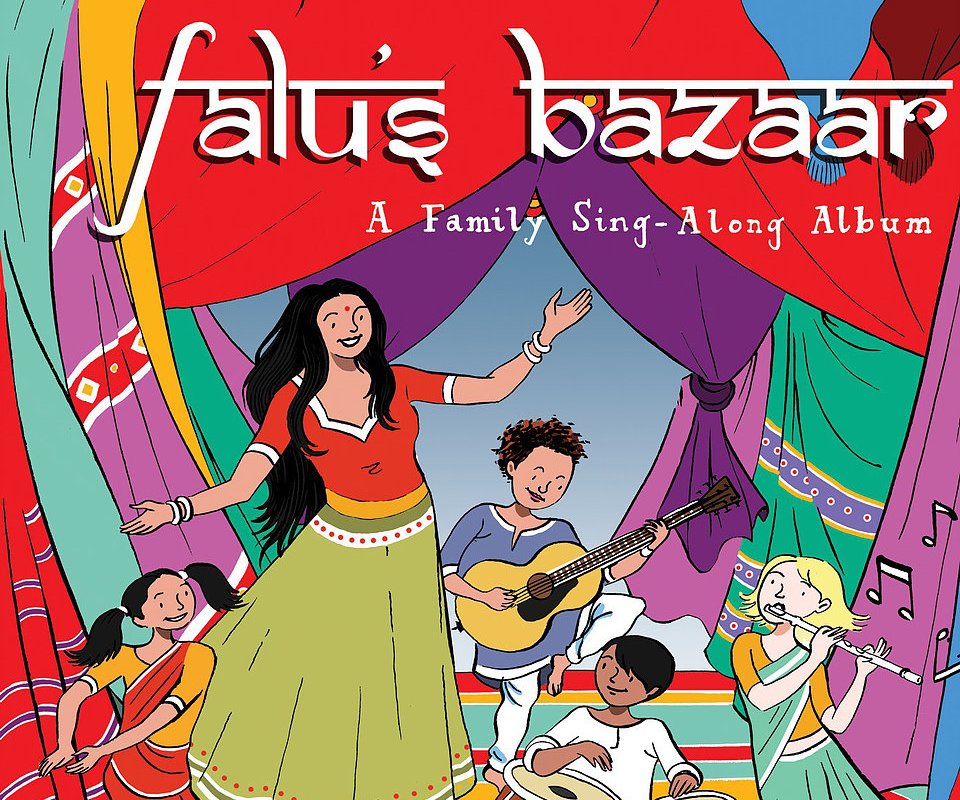 Have you ever felt the need to have a musical representation of your culture that was not just Bollywood, Carnatic or Hindustani music? Something that could be shared with your children and perhaps even their friends? Then you shouldn't miss Falu's Bazaar!

Falu's Bazaar is a delightful and fun album from Falu (Falguni Shah), a classically trained artist from New York who has collaborated with Yo-Yo Ma, Wyclef Jean, Philip Glass, Ricky Martin, Blues Traveler and A. R. Rahman among others.

The songs are in English, Hindi, and Gujarati, sharing the languages in a unique sound that blends traditional and modern vibes, and makes it something you will love to listen to over and over with your children! The songs are about colors, numbers, names of spices (one of our favorites!), introducing yourself in Hindi and more. The album ends with a beautiful Gujarati lullaby sang by Falu's mother.

The Rainbow song is one of our favorites, the seven beat rupak taal paired with the seven colors of the rainbow and of course, kids can learn to count as well! It is such a treat! Another one is about the spices we use in South Asian cooking called Masala!

Here is a peek into one of the songs, Tararum pumpum about traffic lights and signs!

We spoke to Falu about her album, influences, and inspirations

1. Falu's Bazaar is such a vibrant album - the music really makes the colors, sounds even smells of India come alive! What was your inspiration for the album?

My five-year-old son's curiosity and questions led me to come up with an album that can represent South Asian culture and heritage. I wanted it to show kids how beautiful and ancient Indian civilization, culture, and music are. When he was born I tried to find music for kids that shows him his roots and gives him his identity, but I wasn't able to find something I really liked, so I decided to make one album myself.

2. One of our favorites from Falu's Bazaar was 'Masala - Yummy Yummy In your Tummy, these are Indian spices!' This is such a unique subject! What made you think of it?

I think food is such an important part of South Asian culture. I wanted my child to eat everything we ate at home and not end up making different and separate meals for him. So I introduced spices to him at a very early age and never made any separate dishes for him. He slowly started asking me, "Mom, why is dal yellow and what are the black seeds in it?" Those questions interested me. I started thinking how I can I best describe to my son what spices are, so I decided to write a song on spice called 'Masala' explaining spices and their names.

The same thing happened with pots and pans. When he was little he would play with my pots and pans in the kitchen while I cooked. He would take a spoon and start creating a beat from a little pot that he would hold. I responded to him with playing with a plate and a spoon and making music just like we do in a live show. When you play music like this with real instruments on stage, it is called 'Call and Response.' Then he asked me, "Mom, why is that sound deeper than the sound of my pot? What is the name of that pot or what is the name of that plate? That inspired another song in Falu's Bazaar called 'Pots and Pans.'

3. Your songs have a lot of Hindi words, words that the kids can pick up and add to your vocabulary from counting to shapes. What are your thoughts on keeping the mother language alive for the kids that grow up out of India?

To me, language is an identity of a human being. Once you lose your mother tongue or your native language it is very easy to lose your culture. You don't understand what the holy scripts are saying or what the chants and mantras mean. You don't understand what your grandparents and great-grandparents are saying and you become indifferent to their feelings. People who hold on to their language can be closer to families who are not in in the US and who are in India.

For instance, my parents live in India. If Nishaad my son does not speak our native language, Gujarati, he will never understand what his grandparents are really saying. I wanted that bond to grow stronger and hence I held on to my language very strictly. Now he speaks Gujarati, Hindi and English fluently so he can converse fluently with my entire family in India and in the US.

I also believe that children who speak multiple languages are sometimes smarter. I grew up in Mumbai so I can speak 5 languages. It's only fair for me to expect my son to at least speak 3 languages. He can pick up Chinese and Spanish when he is a little older since he lives in NYC.

It was so funny because in our house, Nishaad thought for the longest time that his mom cannot speak English at all. This used to crack me up! If a delivery man would come to our house, Nishaad would answer the door and not let me speak to him. He would tell the delivery man that my mom can't speak English so let me translate. I would play along and he would translate from English to Gujarati to help me talk to the delivery man. It was so funny but it worked for us.

He can easily translate from one language to another really fast without even realizing what he is doing. It was all very playful and fun and I never made a big deal of it. I just went along with the flow, having lots of fun with him and our languages. I made it playful and fun.

4. You have collaborated with a lot of great artists? What songs of yours are your personal favorites?

I still have to write my favorite song. I'm looking for that!

5. What are your favorite musical influences?

Indian classical music influenced me deeply when growing up. I also loved listening to Simon and Garfunkel, Aretha Franklin, Miles Davis, Madonna, Michael Jackson, U2, Emmylou Harris and many more artists. It's a long list.